Meteorite/Tektite Images Back to Images Table of Contents 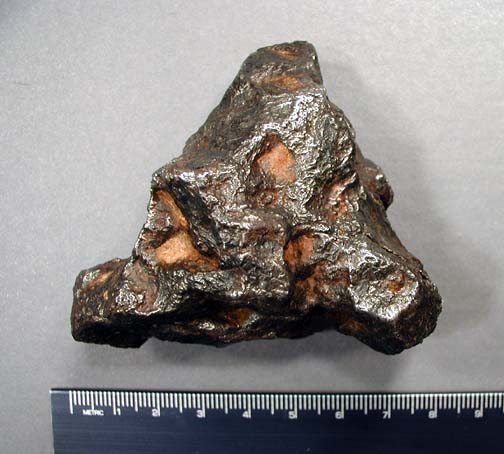 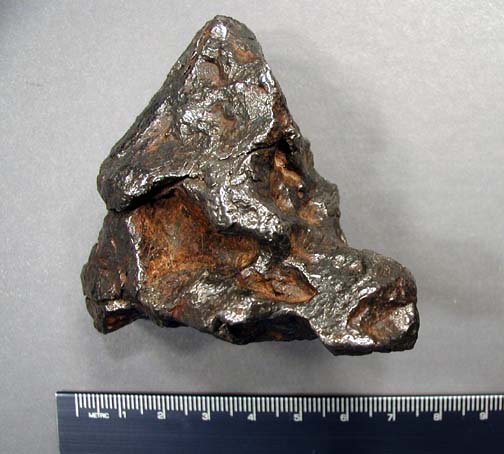 Canyon Diablo
This specimen comes from one of the most well known meteorites in the United States. Its impact created the Barringer Meteorite Crater near Winslow, Arizona. 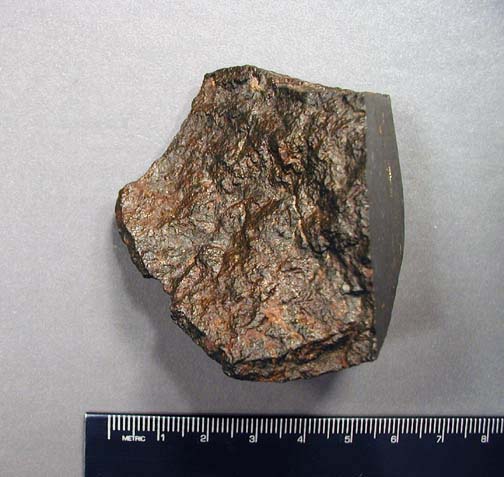 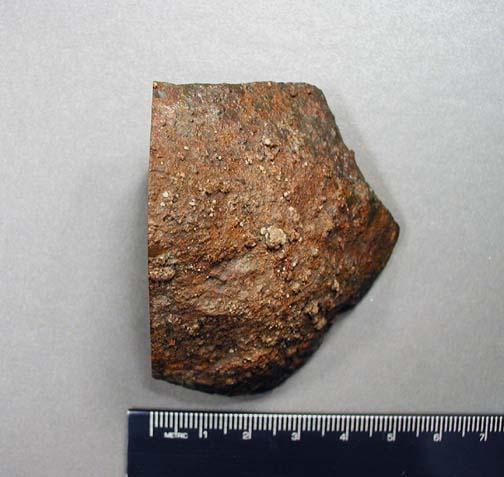 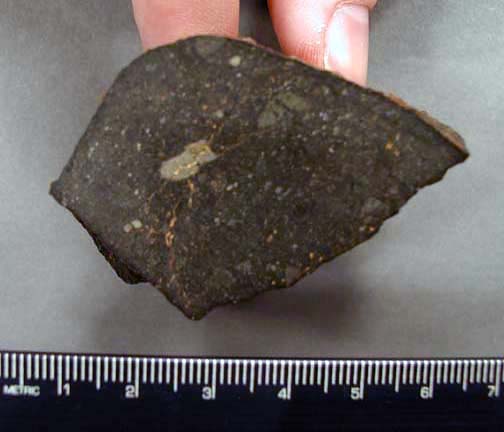 Ghubara
This meteorite fell in the Jiddat al Harasis region of Oman (near Ghubara) in 1954. Since then, over 100 kg of specimens have been recovered. Ghubara is an olivene-hypersthene-chondrite black xenolithic L5. Ghubara contains quite a bit of metal; it is 21.33% iron.

The larger silvery spots on the sliced side are metals. The smaller, whitish areas are xenoliths. These are actually fragments of another chondritic body which has been incorporated into Ghubara, probably from an impact in space. These xenoliths are unrelated to the matrix material, and appear to be of a lower petrologic grade (the matrix is L5, but the xenoliths are L3). 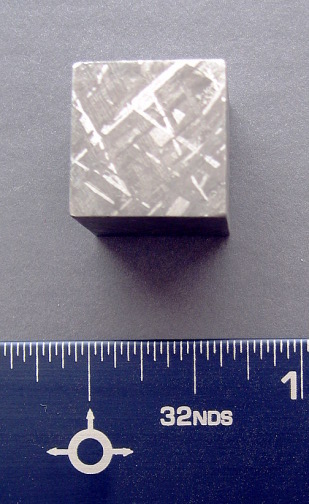 Gibeon
This meteorite fell in Namibia in prehistoric times, and is named after the town nearest to the fall site.  This specimen has been cut into a cube, polished, and treated with acid to expose a Widmanstätten pattern which shows the long iron-nickel crystals.  This interesting structure was formed as the metal slowly cooled, thus allowing the nickel to separate into interleaving bands.  The acid then etches the bands of kamacite more aggressively than the bands of taenite, thus highlighting the bands, or lamallae.) 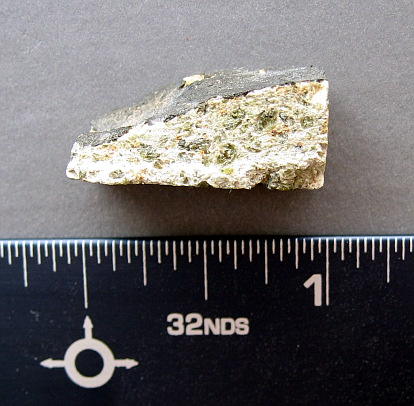 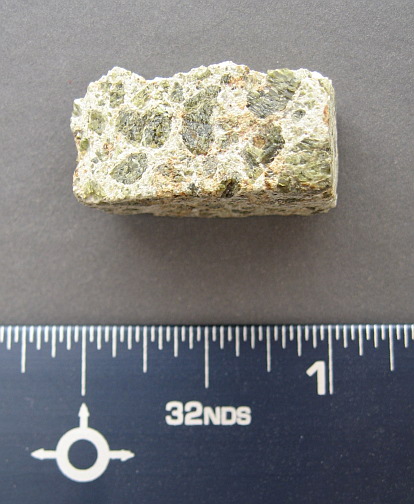 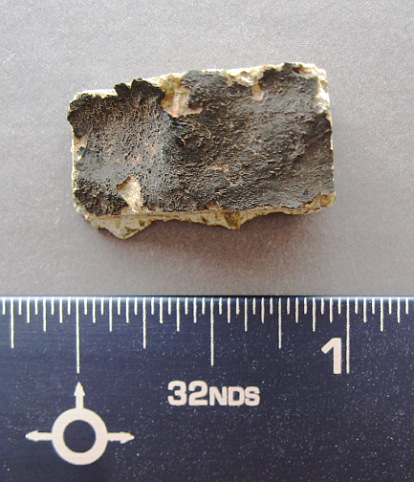 Johnstown
The Johnstown meteorite is a member of a rare group of meteorites called Diogenites after the philosopher Diogenes, who was the first to suggest meteorites originated in space.  Note the black fusion crust, along with the large, green hypersthene crystals, believed to result from slow cooling within a magma chamber of the 4 Vesta asteroid, a large, differentiated asteroid.  4 Vesta is often called the "smallest terrestrial planet" because it has a core, mantle, and a crust, and is also the only asteroid regularly visible to the naked eye.

Click here to read a newspaper article on the Johnstown Meteorite's fall to earth on Sunday, July 6, 1924. 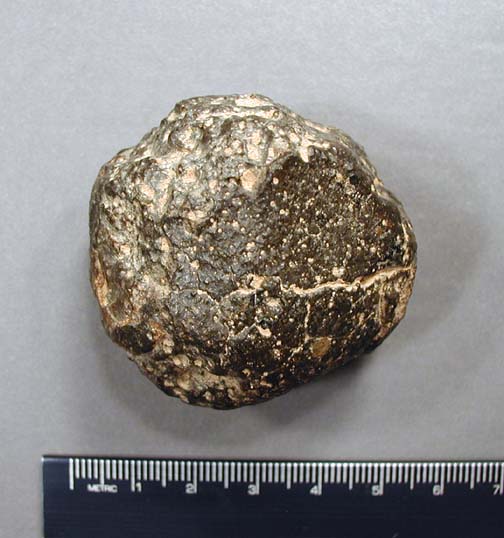 NWA 869 (a.k.a. NWA 787, a.k.a. NWA 900)
NWA is a temporary name given by the Meteoritical Society to meteorites found in North West Africa. NWA 869 was discovered in Algeria (near Tindouf) in 1999. NWA 869 remains one of the largest known meteorites to come out of North West Africa; nearly 3000 kg of specimens have been recovered so far.

NWA is presently classified as an L5, but has in the past been classified as an L3.9-6, an L4, and an L6. This seems to be the result of a wide variance across specimens of the meteorite. Opinions are likewise mixed as to whether NWA 869 is brecciated. NWA 869 specimens typically include chondrules. Some specimens also include what appear to be carbonaceous inclusions. This particular specimen has not been sliced; who knows what it may contain? 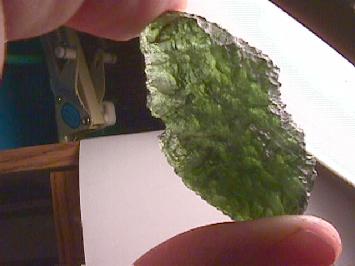 Moldavite
Moldavite is a distinctly-colored tektite found in the region of the Czech Republic known as Moldavia. It is believed that the impact that "spawned" this tektite occurred in Germany. According to Vladimir Bouška's seminal work Moldavites: The Czech Tektites, Moldavites are more stable than terrestrial glass. Moldavites, like all tektites, contain far less alkali metals than common glass. As a result, Moldatives have a melting point between 1100 to 1600 degrees celsius. Moldavites are much drier than terrestrial glasses, containing at least a hundred times less water than volcanic glass and five to ten times less water than the glass formed during nuclear blasts.

This specimen contains no cracks or breaks. The indentations you see are believed to be the result of corrosion by acids in the soil in which Moldavites are found. Only six tektite sites are known in the world. The oldest dates from 35 million years ago. Presumably, older tektite sites existed, but have since been completely destroyed by the elements. 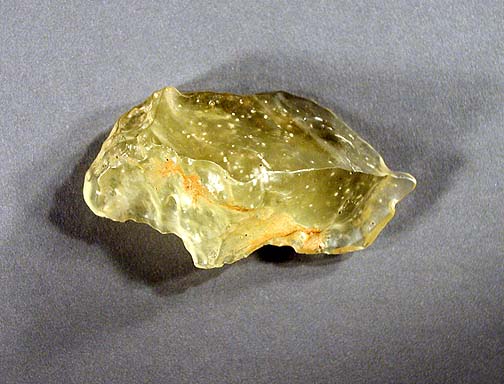 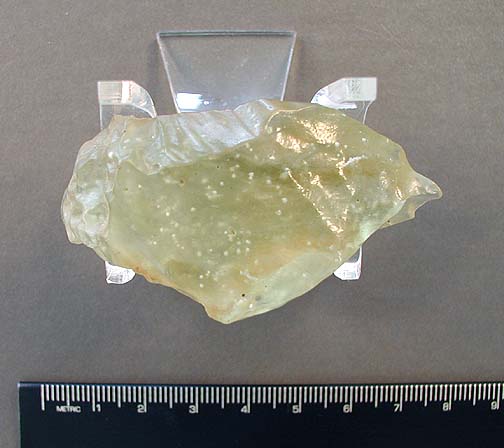 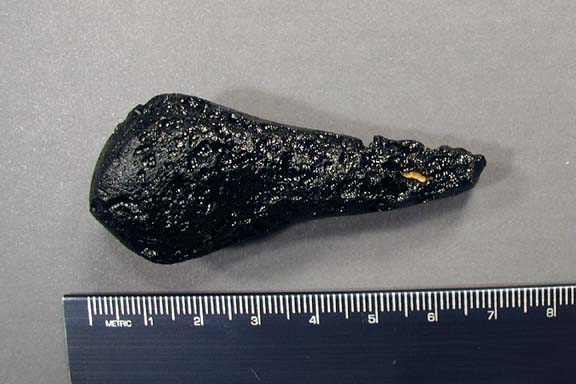 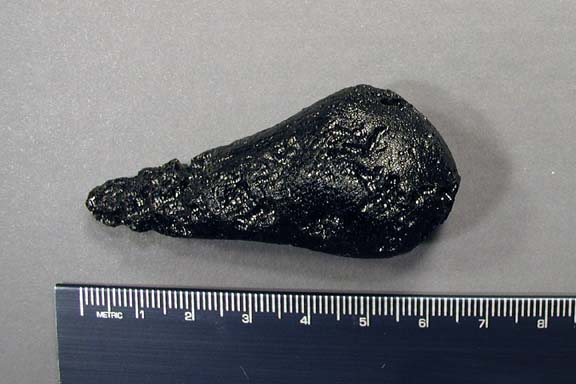 Indochinite
According to research done by Paul Liu, Indochinites were first documented during the Tang Dynasty (618-907 AD). The Chinese refer to them as Lei-gong-mo, or "Thunder God ink-black stones." While most Indochinites come from China and southeast Asia, it is now believed that Tibetanites are from the same impact as Indochinites, and are thus a class of Indochinites themselves.


The author of this page can be reached at webmaster-at-freeexistence.org.  Replace "-at-" with "@" in the "To:" line.

This page is dedicated to Ludwig Fries: photographer, tektite afficianado, and also grandfather of the author!