The blue paragraphs below are my translation of the paragraphs in Jan Skramoušský and Vladislav Badalík's 1996 work Ceskoslovenske Pistole 1918 - 1985 that deal specifically with the vz 82 pistol.  I'm not a native speaker of Czech, so I make no guarantees about the veracity of this translation!  The photos interspersed with the text, and all words in black, are mine.


The vz 82 incorporated the contemporary (and still used to date) system wherein the pistol was equipped with a slide catch, and when the last round was fired, the slide was held back.  Its associated operating latch was located on the left side of the pistol.  The cartridges were double-stacked in the magazine, which tapered to a single row feed.  The vz 82 was chambered in 9mm Makarov (9mm vz. 82) and 9mm Browning Short, both designated for 12 rounds, and 7.65mm Browning model, designated for 15 rounds. 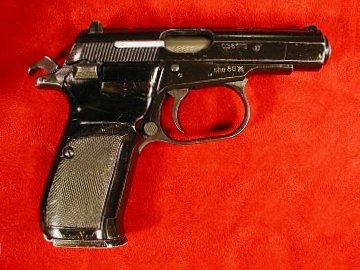 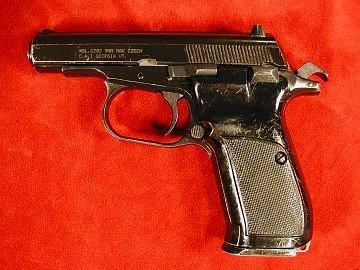 Side views of vz 82 pistol


In contrast to the blued finish seen on early vz 83s, the vz 82 has a finish resembling black paint.  Perhaps this is an early version of the polymer coat seen on modern CZ pistols?  Note also the lanyard ring behind the magazine floorplate; this may also be used to differentiate the vz 82 from the commercial vz 83, which lacked a lanyard ring.  Takedown of this pistol is accomplished by removing the magazine and pulling the triggerguard down (similar to the Makarov), which then allows removal of the slide.  An interesting feature of this pistol is that the pistol cannot be stripped if the magazine is in place, due to an interlock in the triggerguard.

The new pistol was intended for the military, and chambered in 9mm Makarov (9mm vz. 82).  Development of the pistol was completed in 1982, and it was then introduced to the People's Army of Czechoslovakia and marked on the bottom "9mm pistol vz. 82".  [Note: This particular pistol has no such marking.]  In 1984, a large-scale trial of pistols manufactured in member states of the Warsaw Pact took place.  Overall, these trials were not significant, for while vz. 82 pistols initially performed poorly with regard to manufacturing variances, the other pistols under consideration were disqualified based on lacking several features, which until now nearly no other military pistols offered.  For example, the introduction of the magazine catch along with ambidextrous means of actuating it and the manual safety.  Aside from these features was positive evaluation of the pistol's ergonomic layout and higher capacity magazine.  Still unsettled was its holster, which was implemented with regard to left-handed shooters and allows insertion of the pistol into the holster without firing and without disturbing the other mechanisms.  This was novel, and the manufacture of this holster was patented (no. 234 905, published January 15, 1987 by engineer Karel Strouhal of Uhersky Brod).   [Note that the Czech patent office lists the year as 1983.  See also European patent number BE 896073, likewise invented by Karel Strouhal, which covers the tilting trigger guard takedown and the prevention of takedown while the magazine is in the pistol; interesting reading!  See also CS 8305015, which relates to a holster.] 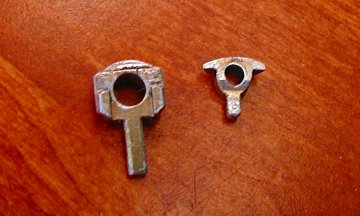 
The vz. 82 uses a rather ingenious ambidextrous magazine release.  A single button can be pushed from either side, and the release uses just a single spring.  Note the golden "straw" color of these; a beryllium copper coating was used on many internal parts used because of its durability and low coefficient of friction.

In terms of basic accessories associated with each pistol, there was the holster, together with a wire cleaning rod identical in shape to that of the vz. 52 pistol, a spare magazine and lanyard rope for use with the lanyard ring.  To use the lanyard rope, one had to brace the battery spring, while simultaneously seating the lanyard ring into the magazine well.

The vz. 82 pistol was subject to the customary marking of a lion alongside a military acceptance marking depicting a pair of crossed swords, and stamped with the manufacturer marking "she", which to the present day indicates manufacture by the Czech Arms Factory, a.s., Uhersky Brod. 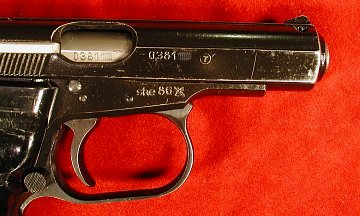 Note the "she 86" indicating manufacture at Uhersky Brod in 1986, and the crossed swords military acceptance mark immediately following.  See also the encircled "T" signifying a Czech arsenal.  Strangely enough, these pistols have leading zeroes in the serial number.

[Paragraph about the vz 83 omitted]

An evaluation of the pistol's performance in retrospect could take into consideration the fact that the pistol occupied an important role in the development of Czechoslovakian pistols.  It should perhaps be viewed and measured alongside its contemporaries.  This Czechoslovakian pistol, no matter what else, was a successful technological step forward, as with the current vz 75 pistols, or if seen in the context of less successful models, invariably all have had one thing in common: good results were achieved using Czechoslovakian manufacture and development. 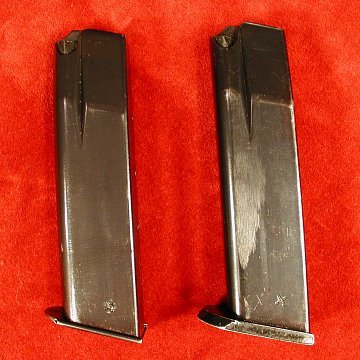 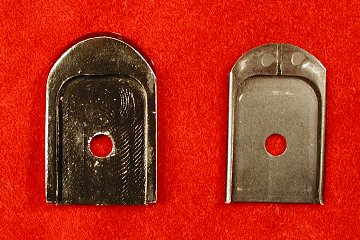 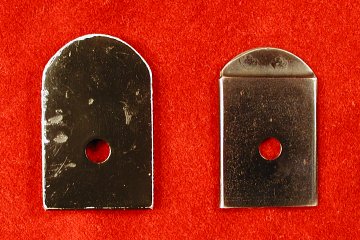 
The floorplate on the left is milled (note the milling marks), and made of a light, non-magnetic metal (almost certainly aluminum).  In contrast, the floorplate on the right is a more flimsy stamped steel.  It is presently unclear how common the milled aluminum floorplate variety is. 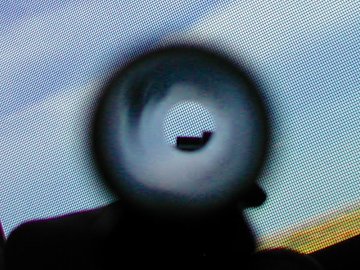 
Unlike the vz 83 which incorporates traditional rifling, the vz 82 has a polygonal rifling much more subtle than that seen in Glocks, Steyrs, and other modern pistols with hammer-forged barrels.  Upon casual inspection, the bore looks quite uniformly smooth; probably a better light source would better show the rifling.

(p. 291) In the year 1982, Sellier and Bellot developed 9mm vz. 82 ammunition for the Czechoslovakian army.  In the 1990.s the round was evidently manufactured only in limited quantities.

(p. 326) As was already generally known, the standard Makarov round was not ideal for service use, and so Sellier and Bellot began developing a cartridge interchangeable with the 9mm Makarov, however with a higher velocity bullet designed for a shorter distance.  The resulting round was designated 9mm vzor 1982 by the Czechoslovakian army.  Development of the propellant charge proceeded within Semtine u fy Explozia.

The basic characteristics of the round are as follows: p Bullet - presents the biggest difference from the Makarov round.  It is produced using a metallurgy technology wherein iron powder is pressed together, analogous to the "Sintereisen" [sintered; a bullet made in this way has less risk of ricochet] German wartime bullet (from [slitkoveho zeleza]).  The mass of the bullet is only 4.5g, whereas the Makarov bullet weighs 6.1g.  The surface of the bullet is lacquered, and an experimental version was also nickel coated or suffused with titanium nitride.  [According to the diagram on the opposing page, these experimental rounds bear no headstamp; in contrast, the standard rounds have a two digit date code, along with the .bxn. factory code for Sellier and Bellot.  The blank training rounds have the same type of headstamp as the standard rounds, but with red lacquer over the (slightly smaller diameter) primer.] This sintered bullet can be used only in a barrel with polygonal rifling.

Case - is proportionally identical to that of the Makarov round, and using the same materials (steel clad with mixed with brass 90 . tombac [an alloy of copper, zinc, and sometimes arsenic]).

Primer - uses the Berdan system with two holes.  Like the Russian pattern, but with a diameter of 5.06 mm and thicker bottom/webbing (0.5mm in contrast to the more common 0.4mm).  The composition of the primer is corrosive.

For practice, training blank rounds were made for the vz 82 pistol.  A brass cartridge was used, along with a 4.5 mm primer made of a non-corrosive compound.  [Unusual that the practice rounds had non-corrosive primers, but the service rounds had corrosive primers!] The propellant is nitroglycerin powder MDN-9-82Cv.  The weight of the propellant was 0.48 g.  The total mass of the service round was 8.1g, while the total mass of the training round was 4.62g.

(p. 301) 9mm vz. 82 rounds are packaged without bands in a rectangular box approximately 60x40x25mm, holding 25 rounds.  The box is printed with abbreviated ammunition markings and manufacturer code, [material components?], and [powder variety?].  Blank training 9mm vz. 82 Cv [Cv is an abbreviation for "blank"] rounds are packaged in a similar box.

PS Grand produces a vz 82 round that has a sintered 69 grain bullet (as compared with the 95 grain Makarov FMJ bullet).  They cite an initial velocity 33% higher than the Makarov load, and an initial energy 29% higher. This, combined with a bullet 72% the mass of the Makarov bullet.  Case lengths of the PS Grand rounds are different, with the 9mm Makarov being 17.9 and the 9mmVz82 being 18.0.  Similar differences exist with bullet length, with 9mmM being 11.2 and the 9mm vz 82 being 10.4.

(p. 258) The vz. 82 holster was a completely original design.  It was used by the Czechoslovakian Army.  The holster was designed by engineer Karel Strouhal and its design was disclosed in Czechoslovakian Patent no. 234905 in the year 1985.  [Note that the Czech patent office lists the year as 1983.]  The holster offers a solution to left-handed soldiers, such that it can be drawn and fired left-handed.  On the left side of the interior of the holster is a space for insertion of the cleaning rod.  The holster is made using smooth brown leather and the interior space flap is marked with an army acceptance stamp comprised of two crossed swords.  Its length is 200mm and its width is 185mm.

Note: To my knowledge, at least one importer (SOG) brought in some of the ambidextrous brown leather holsters described above and was providing them with some of the later pistol sales.


Reminder: All contents of this site, including translations, are automatically copyrighted by virtue of the Berne Convention for the Protection of Literary and Artistic Works.  Further, the original untranslated content has been copyrighted by the text's original authors.  Any attempts to plagiarize this content for inclusion in a trade publication article or book will be dealt with harshly!