The blue indented paragraphs below are my translation of paragraphs in Jan Skramoušský and Vladislav Badalík's 1996 work Ceskoslovenske Pistole 1918 - 1985 relating to the vz 38 pistol.  I'm not a native speaker of Czech, so I make no guarantees about the veracity of this translation!  The photos interspersed with the text, and the non-blue captions, are mine. 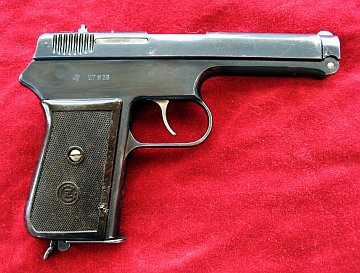 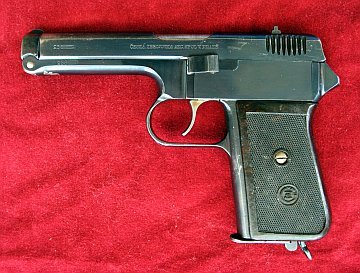 Side views of vz 38 pistol

Because the [Ministry of National Defense armament commission's] evaluation [of April 30, 1938] was generally favorable, it was decided that the pistol would be introduced into the armament of the army.  The model was designated the "pistole vz. 38".  The commission also approved production of the vz. 38 pistols under the supervision of Ceska Zbrojovka in Strakonice.

Already work had begun on the first batch of pistols in the 9mm Browning caliber (the vz. 22 round) beginning with serial number 250000.  In the second half of 1938, the factory was preparing to manufacture the pistols, and on February 13, 1939, Ceska Zbrojovka reported to the MNO that its preparations to produce the first 200 pistols and supplies for manufacture of larger amounts was 96 percent complete.  Thus, within one month (March 6th - 11th, 1939), manufacture was completed on 20 pistols for testing, and these specimens were assigned the serial numbers 250042 - 250061.

Only four days after the commission testing, Czechoslovakia was captured by Germany which precluded the independence of the country, along with any chance of the new pistol making it into the hands of Czechoslovakia's soldiers.  Occupational authorities naturally did not have any interest in stopping production of the new line of new pistols.  Their manufacture continued uninterrupted, and according to occupational authorities, by the end of September of 1939, a total of 16,115 pistols were completed.  The following month, 8,000 pieces were completed, and another 8,000 pistols were finished in November of 1939.  The remaining 8,885 pistols were accepted by the occupational authority in December of that year.

The vz. 38 pistol thus joined the list of Czech-made weapons adopted by the German armed forces.  The pistol was referred to in an army communication (Allgemeine Heeresmitteilungen) issued to Berlin on December 7 under the designation "Pistole 39(t)" alongside the adopted vz. 22 and vz. 24 pistols.  These pistols are marked with a letter "T" on the barrel, which denotes the origin of these weapons. More specifically, this signified the German word "Tschechisch" (Czech).

Instructions as to usage, known as "D-predpis no. 109", were published on April 20, 1940, while the actual Pistole 39 (t) was adopted on February 29th 1940, and so consequently issuance predated guidance on operation.

The CZ vz. 38 was used during World War II by the German Wehrmacht, by Reich Labor Service (Reichsarbeitsdienst) units, in the work Organization Todt, and also to a limited extent by the German Air Force (Luftwaffe).  For the German Luftwaffe, a separate group of 3,000 pistols was additionally manufactured.  Pistols from this production group were assigned serial numbers 240000 - 242999.  Foreign contracts included the first series of new vz. 38 pistols manufactured according to a purchase order.  The subject of the purchase was 1,000 pistols, their serial numbers including a "B" prefix and spanning serial numbers B 291000 - B 291999.  The final recipient of this series is not presently known.  It is, however, likely that they were exported to Bulgaria.  Zbrojovka Brno likewise delivered 4,000 ZK 383 machine guns during the occupation.  It also remains unclear when these groups were manufactured, and it appears that all the pistols got to their recipient.  It is known that by the end of the occupation, some pistols remained in storage at Ceske Zbrojovka in Strakonice.  It remains unknown how large a quantity this was, and how many were subsequently sold.

The fate of some Czechoslovakian vz. 38 pistols manufactured during the occupation is known, more specifically 1,731 pistols which were sent to Finland, proofed by the Finnish army, and are thus marked "SA" (Suomen Armeija - Finnish Army).

The vz. 38 pistol was manufactured with a self-cocking trigger mechanism (the Double Action Only, or DAO system), and also with a trigger that is both self-cocking and capable of remaining cocked (the Single Action-Double Action, or SA/DA system).  Although SA/DA pistols were developed early on along with DAO pistols, the DAO trigger mechanism, which was intended for introduction into the Czechoslovakian armed forces, was based on the principle of the self-cocking trigger mechanism disclosed in Czechoslovakian Patent No. 28114.  During manufacture, a series of these very rare pistols was produced in SA/DA configuration.  These specimens are very easily distinguished because the surface of the hammer is serrated.  In contrast, the DAO pistol hammer has a smooth surface.  The matter of how many pistols were manufactured with a SA/DA mechanism, and how many with a DAO trigger mechanism, remains a mystery.  It is possible to theorize, but undeniably the most widely distributed was the first (DAO) type of trigger configuration.

Some of the markings on the vz. 38 pistols did not change.  Examples will have the following legend centered on the left side of the slide:

Serial numbers are imprinted on the left front part of the slide and identically just below on the receiver of the pistol.  The Ceska Zbrojovka company emblem is stamped on the rear of the right side of the receiver, followed by the acceptance marking "E7" [indicating arms-technical office number 7 which was located at the Strakonice factory], followed by the rampant lion symbol, and concluding with the last two digits of the year of acceptance.

The vz. 38 army pistol represents the evolutionary peak of Czechoslovakian pistol technology during the interwar period.  Its design is still considered to be very unusual, although its simplicity and ingenuity remain unequaled.  Although manufacture and large-scale distribution were not restored in the post-war period, [the vz. 38] can be regarded as one of the apexes of Czechoslovakian pistol designs.  [The vz. 38] also stands as the fundamental prototype for the modern semiautomatic pistol, which exploits several of [the vz. 38's] futuristic design elements.


Reminder: All contents of this site, including translations, are automatically copyrighted by virtue of the Berne Convention for the Protection of Literary and Artistic Works.  Further, the original untranslated content has been copyrighted by the text's original authors.  Any attempts to plagiarize this content for inclusion in a trade publication article or book will be dealt with harshly!